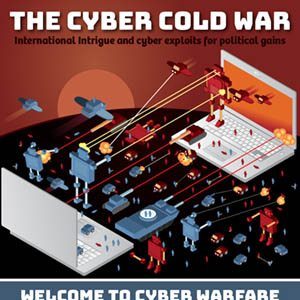 Welcome to cyber warfare
Definition: use and targetting of computers and networks in manuevers of war.

State-Sponsored Cyber Attacks:
[potentially a good way to characterize this section could be an image of a large political statue being toppled, some more substantial aim than vandalism]
Motivated by state-specific initiatives
Potentially after control of infrastructure
Can perform longer-term attacks
Often accompanied with a physical meeting
Aided by more expansive survaillence
Seek targets most critical to larger plans
Large well-organized teams
Can create new zero-day exploits for specific targets
Can afford all types of existing attacks

Are you ready for a state-sponsored cyber attack?
The DNC and DCCC weren’t

This many-headed attack involved:[11, this citation has one way this could be visualized]
Two Targets:
Hilary Clinton’s Campaign
A dozen other Democratic candidates running for positions in the House of Representatives

Many Publishers:
Wikileaks (released 50,000+ Podesta emails on their website)
Mainstream media (released elements of emails pertinent to their reporting)

*An online identity includes access to one online service

—
Russia in Germany:
Date: 2015-2017
Method: Spear Fishing, Trojan
Summary: Several month long acquisition of data from the German Bundestag. Spear phishing, or sending official seeming emails to targetted individuals was employed to deliver trojans. Trojans are pieces of malware disguised as non-malicious code.
Damages: Replacement of computer systems comprised in initial attack (20,000+ computers). Potentially ongoing offensive retalliation to destroy servers housing stolen information.
—
Germany in Russia:
Russia in US: [5]
Date: 2016-2017
Method: Propeganda, Social Engineering
Summary: Fake Facebook and Twitter Accounts, as well as marketing of YouTube videos sought to provoke racial tensions during the 2017 presidential election. Hundreds of fake Russian-led social media accounts helped to promote the Black Lives Matter hashtag #DontShootUs. Fake activists went so far as to schedule events and market them online. Contests utilized Pokemon Go, getting users to take screenshots at certain locations. Information from screenshots was later used as content for propeganda.
Damages: Hijacking of an American cause against police brutality to polarize political conversations.
—
Russia on International Space Station: [6]
Date: 2008
Method: Viruses
Summary: Multiple rounds of viruses have been reported on the International Space Station, allegedly brough on board via a USB drive provided by a Russian Cosmonaut. While the IIS is an international project, NASA is routinelly targetted by cyber attacks, with over 1,500 against the space agency reported in 2016.
Damages: Damaged computer systems are particularly dangerous at 220 miles above Earth. Potential loss of scientific data. Unclear whether placement of infected USBs was purposeful.

—
US/Israel in Iran:
Date: 2008-2010
Method: Malware
Summary: In a potentially unprecedented outcome, Stuxnet — a cyber weapon jointly made between Israel and the US — infiltrated the computer system of an Iranian uranium enricment facility. Unlike many forms of malware that just steal information or wreak havoc on information systems, Stuxnet gained control of the plants centrifuges and caused them to rotate at speeds they were unfit for, breaking physical infrastructure in the plant in the proces.
Damages: Desctruction of hundreds of centrifuges used to enrich uranium for weapons and research.
—
US in China:
Date: ?-2013
Method: Physical infiltration or infiltration of internet service providers
Summary: In a series of leaks by Edward Snowden it was revealed that the NSA had for years infiltrated internet service providers related to the Chinese University in Hong Kong and Tsinghua University in Beijing, two of the premier research universities in China. It is unclear what information was comprimised by the NSA, and what was done with it. But by working through ISPs the NSA is thought to have had the ability to massively mine Chinese internet activity as well as attempt to procure research and trade secrets. The same revelations offered explanations of the NSA hacking Chinese cellular providers and gaining massive access to SMS mesages of account holders as well.
Damages: Potential loss of trade secrets and research. Cost of reconfiguring internet infrastructure and information systems at infiltrated institutions.
—
Iran in US: DDoS of financial sector 2012-2013
Date: 2013
Method: Encrypted DDoS Attacks
Summary: Though a group called Izz ad-Din al-Qassam (Freedom Fighters) claimed this attack as retaliation for a video that mocked Muhammad, US officials believe that is only a front for Iran. In this attack numerous clouds — groups of thousands of networked servers — were hijacked using malware called Itsoknoproblembro. These clouds and public internet providers from around the world were then pointed towards large banking sites to make encryption requests. Different from traditional DDoS attacks, encryption requests consume more networking power and thus were harder to mitigate.
Damages: Major disruptions to online banking capabilities of Bank of America, Citigroup, Wells Fargo, U.S. Bancorp, PNC, Capital One, Fifth Third Bank, BB&T and HSBC.
—
North Korea in US: Sony Pictures 2014[9]
Date: 2013-2014
Method: Server Message Block Worm
Summary: This attack that US officials allege was perpetrated by North Korea involved prolonged access to Sony Pictures’ computing systems. Elements of the server message block included a listening implant, backdoor, proxy tool, destructive hard drive tool, and destructive target cleaning tool. After an initial attack that rendered some employee’s computers inoperable the group responsible emailed executives at Sony demanding payment in exchange for not upping the ante. Probably regarded as spam, the attack continued leading to up to 10 terabytes of stolen data as well as a number of destroyed databases.
Damages: Sony Pictures set aside $15 million in the Q1 of 2015 to deal with damages. Though some damages are harder to calculate. An un-released motion picture (the Interview) was leaked, and 47,000 Social Security Numbers along with personal information about employees.
—